(Tuesday was a pretty boring day, really, but I've tried to distract you from that with excessive and questionably interesting photos and embedded Youtube videos. You're welcome.)

I woke up just after 10. Mama was gone to town so I made a toaster streudel and sat down to watch the History channel. They were showing something about the Lincoln assassination, which has been a big interest of mine lately, and they're showing more all day, so I thought I'd watch a lot, but just ended up watching one show. Around 11 I added a second coat of polish to my nails and then came back in my room to mess around on the internet. Frieda was whining so I took her outside a few minutes and checked on my plantings. (I don't know why; they're not going to sprout overnight.) Then I came back to the computer and chatted with Fez some, and made some changes to my blog layout and graphics.

At 1:00 I took a shower and got dressed. By this point I was getting kind of restless because Mama still wasn't home, and it's unusual for her to be gone more than an hour or two, so I was starting to worry. I knew where she was, but I hadn't expected it to take so long. I thought about making lunch, but I wasn't really hungry yet, so I just went back in my room. I had to put my headphones on for awhile because Frieda was whining and I didn't feel like sitting in the living room with her all afternoon, especially since the History channel had switched over to something boring about telephones. (This is why we want to dump Directv - we watch basically one channel each.)

Mama finally got home at 1:30, exhausted and frustrated from an appointment that took too long and went nowhere, so I made us hash browns and hot dogs for lunch. My book - Motel of the Mysteries - had finally come, so I read some of that after I ate, and then we went outside twice, first with Sarah (pit bull) and then with Frieda.

Then I got back online - Roni was on, and we had a long discussion about how her husband is tired of his job and hates school and isn't sure what to do, so we talked about different uncollege/unjobbing ideas. A lot of my friends have personalities that don't mesh well with traditional jobs - they're too free, too creative, too independent for that. Meanwhile I looked up the Museum of Science and History, because I've never been and wanted to know how much admission costs, and I found a page about volunteering at the museum, which I think I'd like.

Roni signed off and I decided to organize the kitchen cabinets to fit all the new food in. Well, the cabinet where the dry goods go was overfull, so I decided to put some things in canisters, but I didn't have enough. So I went to the dollar store and got two glass jars, and to the grocery store and got a few things we were out of, and some yeast to bake bread. When I got home I put up a few things while Mama cooked, and then I came in my room to eat and read blogs. 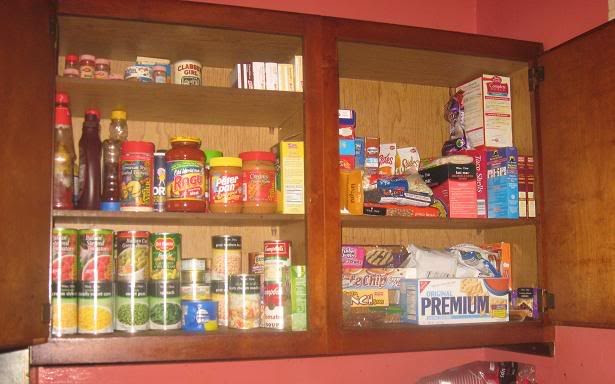 Fez: Ooo, I wish I had open shelving, I just have cabinets.
Me: Those are cabinets. They're just opened.
Look! More food! In jars! 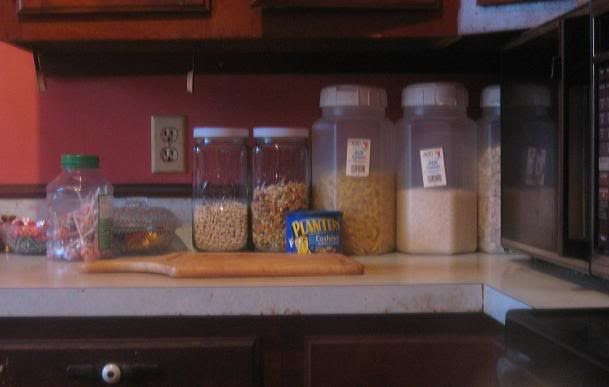 At some point my mom had cleaned out the living room desk, so we put the record player in and then I finished organizing the cabinets. Then I watched an episode of the Venture Bros., and read blogs for a long time - got sucked into a big discussion about classism over at Shapely Prose, which took a long time and got me all agitated. Then I took a shower, and played an online game of Literati (Scrabble) with Sabrina. Then my usual evening chat group (I make it sound so formal) signed on and Fez showed me this video of "extreme sheep herding":

Around midnight I started feeling restless and wanted to start up some late-night fun... maybe Singstar, or Trivial Pursuit, or something busy. But my mom has somehow gotten on a normal sleep schedule (!?!) and was sleeping out there. So I just came back to the computer AGAIN and turned on the TV and watched Bizarre Foods with Andrew Zimmern. I don't know why I only watch, like, three different TV shows. I complained of being bored and Buncy presented me with this:

I told him to remind me never to tell him I'm bored ever again.

I spent awhile longer chatting and then went to bed around 2am. I wasn't that tired, but I was bored and it was late. 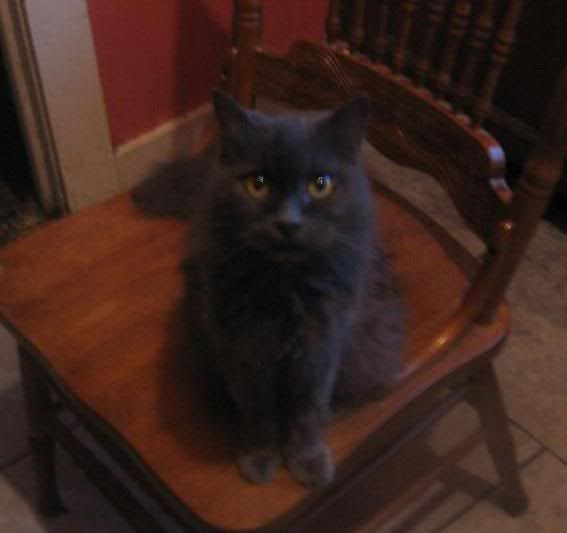 Labels: A day in the life