One argument for unschooling is that people - or at least, children - are inherently good. I won't tell people not to believe this, but what about people who can't? Is it possible to be realistic about all the hatred, violence, and injustice in the world and still unschool? I believe it is.

Just tonight, I've grown up a little bit, because I realized I'm in mourning for my naive childhood belief in inherent human goodness. First came denial, in which I grabbed tightly onto the belief that goodness comes naturally to people, and held on for dear life. Then came bargaining - believing I had the power to force people to be good, as if this would somehow prove they had been good all along. A long period of depression and anger followed, which simply resulted in trying to shut out the noise of other people's hate. And finally, now, I seem to be reaching acceptance: people simply are not as naturally good and kind as I once believed them to be.

But I do not believe people are born naturally inclined to do the right thing, or even to know what the right thing is. To do that, a person needs to develop a strong conscience and continue working on it throughout life. Conscience is like a muscle that needs to be exercised, and the way to exercise it is by making decisions. Deciding what to wear, what to eat, what to say and how to say it are all actions that exercise conscience. It follows, then, that a weak conscience comes from not making decisions. How can a person who is told what to do and where to go at every moment ever exercise conscience? How can a person who has external rewards and punishments dangled in front of them ever learn what their own inner voice says to do?

I believe in unschooling for two big reasons that have nothing to do with its ability to result in academic knowledge. First, my own conscience tells me it is immoral to take ownership and control of another human being in the way that schools and most parents try to do with children. Second, I believe that people learn to be accountable for their decisions by learning early on that their decisions affect other people and things in the world. But they can only learn that by being allowed to make decisions. I don't believe people are inherently kind all the time, but I do believe unschooling produces people who are more kind and think more about their decisions, because they've had more practice. I want people to have that practice a lot more than I want them to have practice at spelling and math.

With the winter holidays approaching rapidly, many people feel compelled to re-evaluate their values with regard to materialism and capitalism. Now, I’m firmly on the side of those who feel that the main point of the holidays should be about love, sharing and generosity, not about rampant consumerism.

That being said, I want to remind people that consumerism vs. anti-consumerism isn’t the only value at play in holiday gift-giving. Many people don’t get nice things all year, and the holidays – particularly the rewards reaped from shopping Black Friday and Cyber Monday sales – are their only chance to own the same things as their peers. Some people also cannot afford to shop anywhere other than Walmart and other discount chains, and for some people that may even be the only store they can get to. So while I think buying local and handmade is a worthy goal, I also hope that people will be compassionate toward those for whom those are not viable options for holiday shopping.

Another important value at play is honoring who people truly are and respecting their needs. I hear far too many lectures this time of year about how people, especially children, should be happy with whatever they get. But if someone has given them a gift that clearly says “I don’t really know or care who you are or what you want”, it makes sense to be disappointed and hurt. Try to put yourself in the shoes of a child or a teenager too young to have a job. In most cases, they have no real income of their own, except maybe a modest allowance. Most parents only give big gifts to kids around birthdays and holidays, and if that deeply desired XBOX or iPad doesn’t come at Christmas, to most kids, this means it isn’t coming at all. That’s a big disappointment. Even if the parents truly couldn’t afford the coveted item, it’s still only fair to be gentle and compassionate toward the kids and respect their feelings on the matter. For some kids, it might be a good idea to let them know ahead of time that the desired gift isn’t coming, to avoid an unhappy surprise in the middle of the holiday celebrations.

And because I know it’s going to come up, I want to speak a little to anti-technology sentiment and the related idea of “first world problems”. I hear this phrase thrown around a lot with regard to people not being able to afford iGadgets and other popular forms of technology. First of all, the term “first world problems” is rooted in the idea that so-called “third world” countries don’t have technology and that their citizens spend all their time in agony and strife. This notion, in addition to being rooted in classism, racism and Eurocentrism, is also just plain false. People in Africa do know it’s Christmastime, and some of them are wishing for – and receiving -  iPads right along with their American peers.

The other problem I have with this phrase is the idea that if your basic needs are met, you should be ashamed to want anything else. To dispel this notion, let’s take a look at one of my favorite psychological model’s, Maslow’s hierarchy of needs: 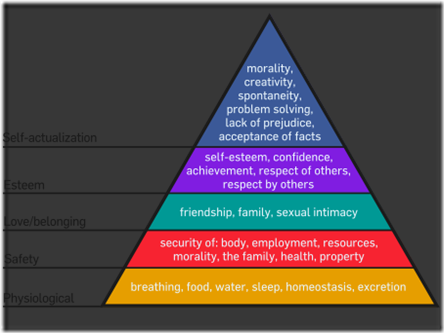 When most people use the word “need”, they’re referring to the bottom two tiers of the pyramid – the ones dealing with immediate physical and safety needs. But according to Maslow, humans actually have many other needs: for emotional bonding, achievement, respect, creativity, learning, and equality. So before you shame a person for wanting more than they “need”, consider whether their desire is a way of meeting a higher-level need. The fact that humans are not generally satisfied by just having their most basic needs met is a good thing! It reflects the natural human tendency to want to ascend beyond meeting those needs and really make life meaningful. All human progress toward being healthier, happier and more compassionate has been based in the quest to meet the top three levels on Maslow’s hierarchy.

Finally, let’s talk about technology as a valid interest. Technology gets a lot of unfair hate these days, because the desire for various gadgets is viewed as a symptom of consumerist greed. But some people just genuinely love technology. I’m personally a big fan of it, because I think it improves lives, and makes many kinds of information and skills more widely accessible to people who might not be able to access it otherwise. Take the internet as an example: having access to even the simplest information, such as newspapers and religious texts, used to be possible only for the richest of people. Now, almost anyone can get online and read information from all over the world. Technology is also particularly beneficial to people with disabilities, and has allowed people to speak, read, and write when they wouldn’t have been able to otherwise. I have personally always been drawn to things like video games and computers, and was always the person who was asked to hook up the TV or program the VCR. It’s taken a long time for me to get over the cultural pressure to feel ashamed of my love of technology. But now I realize it’s a legitimate interest. Some people are into books, some into nature, some into computers. Loving technology is not about consumerism or a compulsive addiction to screens, it’s just another interest. So if someone’s wish list this year is full of expensive hard drives, gaming consoles and i-Things, please realize they might not be just greedy. They might just be being honest with you about what it is they love.

Posted by Elisha at 1:42 PM No comments: