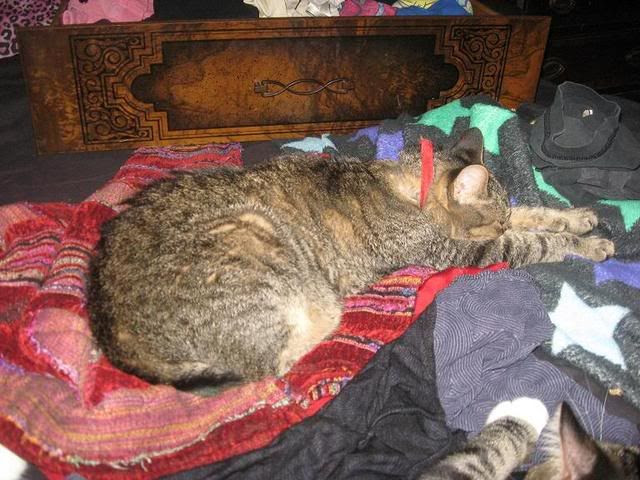 I have a cat who is very smart, who I used to think was very dumb. When she does something irritating, and you stop her from doing it, she just keeps doing it until you give up, or waits until you're not looking. When we first got her (at which time, I should note, I was working in a school) I mistook this for a lack of ability to learn. Actually it just meant that she was smart enough to realize that I'm not all-powerful. Lots and lots of kids in school are treated as "dumb" for the same reason. Or "he's smart, but he has no common sense" which is seen as even worse.

Because Kasey is smart, she knows how to manipulate people to get what she wants. She knows there are certain times of day when I always come out of my room, and at those times will wait outside the door until I open it. When I do, she runs inside, and then under the bed where I can't reach her. This used to cause a lot of headaches and bad mornings and yelling and cursing and stomping, not just at her but at anyone who was unlucky enough to get in my way until I either got her out or got over it.

One day, I finally gave up. It was a day when I didn't have to rush off to work, so I just let her stay under the bed. There's nothing under there that could hurt her, anyway. After just a few minutes, she came out and laid on the bed. When I saw that was all she wanted, I suddenly felt bad for all the chasing and yelling and stomping. I went and sat by her on the bed and petted her, and she started mewing, purring and rubbing her chin on me as if I were the greatest person in the world. This was a cat who was never affectionate, and up to this point I'd been convinced that she deliberately tried to piss me off. I realized then that it hadn't been about the need to have her out of my room; it had been about my need to be in control. Unfortunately, being in control meant that both of us - and my poor mom, who had to deal with my bad moods - were miserable. If I let go, we could both be happy.

Today she ran in my room again, and if she'd gone straight to the bed it would've been fine, but lately she's been going to my spare desk. I don't like her getting up there because there's piles of stuff on the desk and she always knocks something over, so I tried to put her out of the room. She wasn't going to let this happen and ducked under the desk. I sat down and called her, sweetly, but she's not stupid enough to fall for that trick and just stared at me. I started to get all exasperated about how mean this cat was and how I wished I had a dumb cat who would just listen.

Then my unschooling philosophy hit me and I thought about what my goal here was. Was the goal really to have the cat out of my room? No, I didn't care if she sat on my bed, I just didn't want her knocking all the stuff off my desk. But she didn't want to knock all the stuff off my desk either. She just wanted to sit by the window. I was the dumb human who put a big desk in front of it and covered the desk with stacks of flimsy junk, after all. It dawned on me then that her goal and my goal weren't incompatible. I moved a few things around on the desk so they wouldn't fall over so easily, and went about my business. The cat jumped up easily without knocking a single thing over, and that was that.

Our goals were only incompatible when I made them that way. When it was her will vs. mine, a battle of "I'm not gonna let her get her way!!", somebody had to lose. But when I stopped to think what the goal really was, there was a compromise. The same thing applies to relationships between humans, except the consequences are worse. If I make my cat "lose", she might pout a little and not trust me as much next time, but she's probably not going to harbor emotional scars. But if I make a friend or a spouse or a child lose, I might make them see me as a tyrant, or they might believe all my bullshit about how stupid they are and how much I hate them. In either case the relationship will be damaged. In the latter case, they might be damaged. That's too high a price to pay for winning a battle of wills. But if I compromise, both sides reap more than they've sown: the relationship improves, the house is peaceful, and a problem has been solved.

And even if it is just a cat, by being kind to her I bring that much more kindness into the world, instead of taking some away. Not only have I given some to her, but because I didn't get mad I'll have more to give out for the rest of the day. The world doesn't have enough kindness to go around, or enough peace or love or joy either. But you can add to it, and every little drop counts.
Posted by Elisha at 4:48 PM