When I quit my job last week, I thought it would be a few weeks of just vegging before I started feeling like myself again. But so far my personality and interests are returning by leaps and bounds, and it's such a fun ride. I decided to record each day as it unfolds just to document the joy and share a little of how I live. I realize these kinds of posts can be incredibly boring, but also that some people love them (I'm one of those people - "day in the life" posts are my favorite thing on other people's blogs) so if you enjoy this sort of thing, here's day one of my doings report.

(I would have taken more pictures, but I find lugging a camera around tends to interrupt the flow of things, plus you do not want to see how I generally look while sitting around the house. It's scary.)

I woke up around 8:45, Mama was already up. She made waffles and I ate some and watched the Golden Girls. At 9:30 Mama wanted to go get cigarettes, and I needed to go to the hardware store, so I told her if she could wait till I got dressed I'd go with her. We went and got a big bag of potting soil, a trowel and cultivator (claw thing), and some onion seeds. Then we came home and I went in my room to listen to my iPod for awhile.

Around 11 I got a snack and sat down at the computer to talk to Fez and look up how to connect a computer to the TV. I want my mom to be able to watch Hulu when we get rid of Directv, and I want my music collection available in the living room. Then Roni signed on and I asked her too, because her husband has set up something like that, and we talked about hair henna and stuff. I also asked my mom about when my family had chickens, and she told me some stories about that, including the time my grandfather got attacked by a rooster.

I was thinking about where to put art supplies so they're easy to access, and I remembered that the huge secretary desk in the living room is mainly just collecting junkmail. So I looked in there to see how much space is in the main desk compartment, and found some calligraphy pens, so I sat down to practice some calligraphy. Mama was watching Monk (her favorite show now that they took Miami Vice off) so we watched the tail end of that and then part of an episode of Jeopardy. I knew a few answers about geography and one about Mother Teresa visiting AIDS patients (natch).

Then we went and took Frieda (dachshund) outside. I had mowed yesterday, so the sidewalk needed sweeping. I did that while Frieda and one of the cats ran around and chased each other in the short grass. Then I pulled up a few weeds and decided to go ahead and start my carrot and tomato seeds. We had found some containers in the shed that my grandparents had grown things in when I was little, so I put potting soil in those and sowed the seeds and put them in the sun. By now it was starting to sprinkle, but we saw the UPS truck going down the road and decided to wait and see if they were going to bring us anything. I was hoping to get a book I ordered, but we just got my mom's blood pressure medicine. I think my book is probably coming in the regular mail, anyway.

We came in and ate hot dogs and ramen noodles for lunch, around 1:30, and I caught up on some blogs and things for awhile. I thought about going to a new park I used to pass on the way home from work but never checked out, but then I remember that it was raining (short attention span). SO I decided to take part in last summer's rainy-weather pasttime of listening to Pink Floyd while playing my DS - while curled up in bed, of course. However, I didn't get to that because I went to the bathroom and then Mama sidetracked me by asking me to go get the mail. She didn't realize it was raining but I didn't mind - I ran through the rain and mud, in my tank top and shorts, to go get the mail. It was fun. We got the light bill - I was nervous that it was going to be high again, but it was low. WAY LOW. I was so excited I flung the water-stained bill right in Mama's face when I got in. And then I took a bath and changed clothes.

I came back to the internet for a bit, and started thinking simultaneously about henna and the desk. (It's funny how much thinking I can do at once, now that work isn't eating my brain cells like so many Pac-Man dots.) I decided that I want to get both hair and tattoo henna, and that we should put the record player in the desk - it's currently in my mom's room to keep the cats off it, but it doesn't get much use there. It'd be safe in the desk. I went in the living room to tell Mama about this and to paint my nails. She was watching Monk again so I watched a little of that while I did my nails.

Spent most of the rest of the afternoon browsing the internet and chatting on MSN, then took a nap around 4. Woke up at 6, ate dinner while watching Anthony Bourdain: No Reservations. (He was in Tuscany, I think.) Mama's church had brought us over a box of food so I went to go check that out and put it away. Then I browsed the internet some more, looking at henna tattoos, and watched some shows about food. One of the shows talked about how potato chips were invented, so I decided to try and make some of my own. They turned out pretty good. 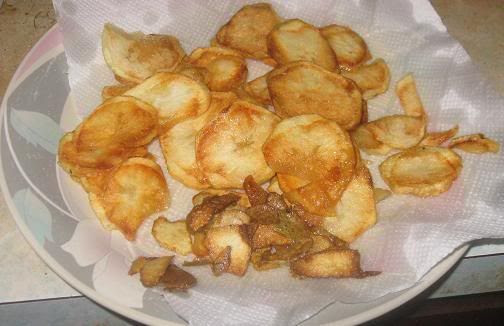 Then around 9:30 I found some online versions of Rush Hour and Tower of Hanoi (puzzle games) and played those. The rest of the evening was quiet, spent browsing the internet, chatting, and playing some online games. I went to sleep around 11, with soft music on, thinking about my early memories and how early childhood can shape a person's view of the world.
Posted by Elisha at 9:33 AM

Labels: A day in the life, food