I was thinking about South Park today. Well, more to the point, I was thinking of a comment left on this entry from The Seventeen Magazine Project, a brilliant project undertaken by an equally brilliant teenager. The comment in question, or the part of the comment that got me thinking, was this:
"this is exactly why i hate southpark. i don't need a bunch of straight white males telling ME what i should and shouldn't find offensive, thanks."
The discussion wasn't about South Park at all, and the mention of it was somewhat incongruous to the rest of the thread, but I still found it relevant. Now, for those of you who don't watch South Park, I realize it looks like a crude, potty-humor cartoon suitable mainly for stoners. When it first came out (half my life ago - ouch), that's basically what it was, and I'll admit there's still that element to it. But over the years, it has also developed into a forum for biting political and social commentary. What interested me about this comment is that it points out the privileged viewpoint from which Trey Parker, Matt Stone, and many of the other South Park writers make their arguments. Indeed, the episodes sometimes espouse the kind of views that would make me switch off the TV in disgust if they came from the mouth of a serious political pundit. And yet, I love South Park, even when it offends me. Why?
I spent some time today mulling that over, and I realized that it basically comes down to this: Regardless of whether South Park makes me shake my head in disgust or clap wildly in agreement (and it seems to do both in equal shares), it is one of the very few shows that both makes me laugh and makes me think on a consistent basis. Thinking on that more, I realized essentially every show I watch is appealing for one or both of those reasons. I've been feeling a bit data-happy lately, so I decided to make a graph. Below is a plot of 21 shows I watch regularly, or watched regularly in the past, and my reasons for watching. (I was tempted to knock one off to make a nice round number, but a mother cannot choose between her children.) 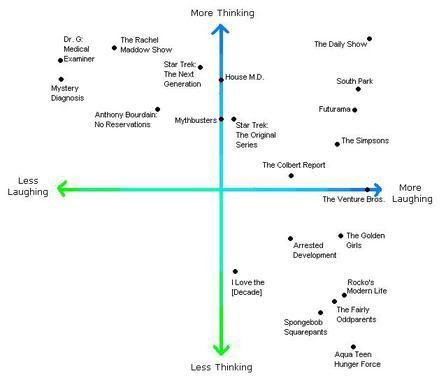 (Click to embiggen.)
A few notes on this graph. First of all, this is obviously completely subjective. I can only rank how much a show makes me laugh or think; there is no objective measure of how funny or thought-provoking a show is. Which brings me to my next point: The shows which make me think the most are not necessarily "smarter" shows. I would rate Arrested Development, for example, as a "smarter" show than South Park, in terms of the humor being much more sophisticated. But South Park got a higher "think" score because it generally makes me question my views or reflect on things that are going on in the world. Arrested Development simply puts its smarts in a different basket.
I also feel like shows intended for children got shafted a bit because of my age. As a near-25-year-old, Rocko's Modern Life doesn't really inspire a lot of original thought in me, but when I was seven - and thus part of its primary target audience - it certainly did, and were I seven years old today, I'm sure Spongebob and The Fairly Oddparents would as well. So again, there is really no way to measure a show's ability to provoke thought.
The biggest thing I noticed, however, is that even ranking the shows as honestly as possible, not a single one fell into quadrant III. Nothing. Zilch. There are definitely shows I would put in that quadrant, I just don't personally watch any of them. But someone does, or they wouldn't last a minute on the air. So while "makes me laugh" and "makes me think" are my personal criteria, it occurs to me that other people may have completely different reasons for enjoying or not enjoying a show. Of course, it's probable that shows that I would put in quadrant III would be in another quadrant for somebody else. But I still suspect that other people's reasons for watching a show are not the same as mine. For example, there's a long list of things I don't really care about in a show:
Those things can make a show better, mind you, but they're not going to draw me in to begin with; they're icing on the cake of shows I already like. But I recognize that for some people, these factors may be much more important, to the point of making or breaking a show entirely.
So tell me, internets, what do you look for in a show? I've put a poll on the sidebar of my blog, and would really appreciate your responses. I'd also love to hear your thoughts in the comments, especially if there is some factor I've left out of the poll. I think this stuff is interesting to think about, not only because it can help us understand our own preferences, but it can also help build bridges between our own interests and those of other people. It's much easier to find the value in what another person likes if you're aware of all the different ways a show can be appealing, and that can go a long way to prevent shaming and judgement over differences in taste - something that, I must admit, I am still working on.
*Do not question this. I will sic all of my Trekkie friends on you. It won't be pretty.
**Although I still maintain that there is a clear difference between smart-people hot and Hollywood-pretty hot. I would not find these people one bit attractive if they did not make me laugh and/or think, so I maintain that I have not actually diverged from my basic point here. Much.
Posted by Elisha at 12:30 AM

I've never considered cinemetography as important in determining whether a show is good or bad, but I can't stand The Office because of the way it's filmed. And the way it pretends to be a reality show. And, oh, THERE IS NO LAUGH TRACK! I never know what's supposed to be funny.

I think one of the most important aspects of a tv show is its relevancy to my life. I used to love Degrassi, but I can hardly watch it anymore because I'm so over all that high school drama. I've never gotten into teenage culture, so MTV doesn't appealed to me.

I don't really watch much tv, so maybe my opinion is not as...credible? I don't know.