And when I think I know what's best for me
Fate, she takes me back
To exactly where I need to be
-Amy Steinberg

Last weekend I was having a major freakout because I still had no job prospects and I thought my lights and water were about to be cut off. Then on Saturday, my friend Jill emailed me and asked if she and her family could park their RV here for awhile, and they could give me money right up front toward the electric bill. On Sunday, they were here. They just left yesterday, on their way to a fixed water pump and other states. The timing couldn't have been more perfect, really - I was getting desperately lonely and desperately broke, and their visit helped with both of those. One lesson I've learned in the four months since I lost my mom is that when you're open to possibilities and don't try to force things, things have a way of working out. Maybe eventually I'll learn that lesson well enough to skip the freaking out stage entirely.

But as Edie Brickel would say, shove me into shallow water. I always mean for this blog to have more of a "what I've been up to" feel, but then I end up writing nothing but essays and navel-gazing stuff. People seem to like those posts, but I forget that I can write fun stuff here too. I wonder if people who only know me through my blog think I'm a pretty serious person. Really, I am just a goofball who occasionally has a serious thought and likes to write them down before I get distracted by a fluffy squirrel.

So here's what we got up to this week. I wish I had pictures, but both Jill and I forgot to take any all week! But there was much jumping on the trampoline, on which the kids had me play "Gummi Bears" with them - you know, from the old 80s cartoon? Ironically, they had to teach me how to play, because I didn't have the Disney channel as a kid and have never seen the cartoon! But I was Princess Calla, and Kaya was Igthorn, and Pearl and Fern were Gummis. We also played Super Mario, where Kaya and I took turns being Mario, and whoever wasn't Mario had to be the Koopa shells and Goombas and stuff. I love how the advent of DVDs and Youtube and things mean that kids are still into stuff from when I was a kid.
We also went to the Salvation Army store a few times and picked up a bunch of old movies. I found out the SA is the best place in the world to buy movies, if you don't mind VHS and you like watching older stuff. Jill got a huge stack of Disney movies for the kids, and I found a bunch of my favorites - Star Trek IV, The Breakfast Club, and The Nightmare Before Christmas, to name a few. I pretty much doubled my movie collection, which was pitifully small (if you don't count the 30+ Elvis movies I inherited from my mom).

All in all it was a great week. The thing I love most about hanging out with unschooling families is that I can be friends with the whole family. There's not that invisible wall separating the kids and telling them to run along and play because grownups are talking. If kids aren't kept sheltered from all signs of the adult world, there's no reason grownups can't talk while playing Mario Party DS and being climbed on by cuddly little girls.

When they were ready to leave, Kaya was looking a little sad, and he suddenly had to run into the RV (which Danny had already pulled out into the road - the kids were going in the car) to draw me a picture, and the girls followed suit. That's a nice memory to keep in mind when the job hunt is getting me down. Maybe I don't have a BA and I'm not bilingual and I'm not a "specialist", but dammit, drawing me a picture is a Major Emergency, and that counts for a lot more in the grand scheme of things. 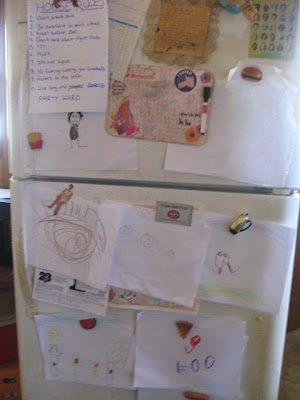 I'm glad things went well with the RV'ing family. Here I was wondering how you were managing without water and electricity. And you're right! If you let things be, without force, good things might come.

pearl is sitting on my lap, she thought it was very cool to see the pictures on your fridge! she says "i will never NEVER forget bonnie" all dramatic like. you know how they talk ;)
ill try to upload the pic i took w my phone soon